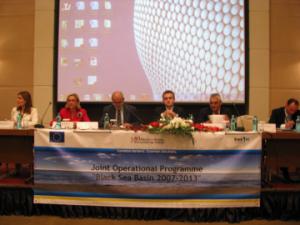 The Annual Conference of the Joint Operational Programme “Black Sea Basin 2007-2013” was held in Chisinau, Republic of Moldova on 18-19 September 2012. Around 150 participants were present at the conference from 8 programme countries (Armenia, Bulgaria, Georgia, Greece, Moldova, Romania, Turkey and Ukraine). The conference gathered representatives of the European Commission, local, regional and national authorities, non-governmental organisations, project beneficiaries/partners, consultancy and research organisations from the EU member/candidate states and partner countries.

The conference followed a method of “from general to particular” starting from general issues related to the Basin, ending with the particular issues presented by the project beneficiaries.

The focus on the first day of the conference was on the Black Sea Basin region and during the first session high level representatives of the National Authorities from 8 Programme countries presented their views on the cooperation in the Basin and how it is achieved in practise.

The focus on the second day slightly moved on more practical and detailed subjects regarding cross-border cooperation and Programme’s status. Status in implementation of the ENPI CBC Programmes and Black Sea Basin Programme, results of the Mid-term Evaluation of the Programme, the Mediterranean CBC Experience and Future CBC Programmes in the Framework of the ENI were presented and interactive discussions took place regarding status and future of EN(P)I.

Representatives of the project beneficiaries presented their projects, as well as the opportunities and challenges they experienced in implementation of their projects.

Both days of the conference were accompanied by an exposition of the projects under implementation on the occasion of the European Cooperation Day which is celebrated all over Europe, in order to showcase the impact of the European Territorial Cooperation Programmes in the participating regions.

The conference involved interactive discussions on the current status and future of European Neighbourhood Instrument, cross-border cooperation and the Programme. In addition, with the contents touched upon and profiles of the participants, the conference served as a useful platform to draw a general picture of cooperation and exchange of ideas to enhance and harmonize cooperation efforts. Therefore it resulted in positive outcomes not only for the Programme but also for the Black Sea Basin in general.