The Eighth Meeting of the Joint Monitoring Committee of the Programme

The eighth meeting of the Joint Monitoring Committee of the Joint Operational Programme “Black Sea Basin 2007 – 2013” was held in Yerevan, Armenia on the 8th of October 2013.

The meeting was attended by members of the Joint Monitoring Committee , representatives of the Joint Managing Authority (Ministry of Regional Development and Public Administration), Audit Authority within Romanian Court of Accounts, European Commission and INTERACT ENPI.

Also the Joint Monitoring Committee decided the available funds resulted during the contracting stage or during the implementation stage to be used to award a grant to the first two projects with the highest scores from the reserve list of projects under the 2nd call for proposals. 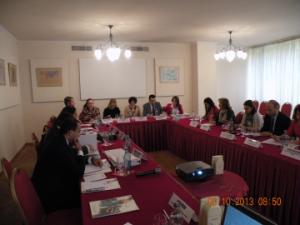 The final version of the Interreg NEXT Black Sea Basin Programme 2021-2027 was approved within the eight meeting of the Joint Programming Committee
11/05/2022 The eight meeting of the Joint Programming Committee - body responsible for the preparation of the Interr
Online course on Interreg NEXT
24/02/2022 As a complement to the document on regulatory changes in Interreg NEXT, TESIM (Technical Support to the
Horizon Europe – funding opportunities
25/01/2022 Horizon Europe Framework Programme has launched a call for 6 new funding opportunities in various busines
View All News Archives
Newsletter
Workshop for beneficiaries on developing Effective Communication

The European Union needs to show concrete results of its cooperation and development actions, and so does the ENI CBC community. At all times, communication activities should pursue the overall objective of increasing the knowledge of cross-border cooperation at the external borders of the EU and its position as a valuable, strategic tool for the EU and its neighbours.

DG Maritime Affairs and Fisheries (DG MARE) and The Joint Research Centre, in cooperation with DG Regional and Urban Policy (DG REGIO), are organising the Workshop “Smart Specialisation for Sustainable Blue Economy” on 6 July 2021, at 09.00 – 12.45 CET.

Training for Beneficiaries from the 2nd Call for proposals

The training sessions are organised by the programme management structures and are aiming to enhance capacity of beneficiaries to collect, consolidate and report the progress achieved by the projects.

View All Events
Are the formulas in the 4th sheet "Table_4_Sources_ of_funding" in the Budget forms correct? The row for "TOTAL OTHER CONTRIBUTIONS" calculates also the amounts in the rows of "TOTAL EU and PARTNERS CONTRIBUTION".
Please leave the formulas as they are. There is no problem with the default formulas as they do not influence the evalua
In annex A "Grant Application Form", chapter 2.3.1 "Relevance to the objectives and priorities of the call for proposals" what does the expression "relevance of the joint Action to any other specific requirements indicated in the guidelines of the call such as partnership, local ownership" refer to?
Section 2.3.1.2 "Describe the relevance of the joint Action to any specific measures and any other specific requirements
There are several problems adding new pages in the Partnership Statement of the Application form. Is it correct to handle it with handwriting or it shall be a problem?
The general rule that the Grant Application Form shall be typed is valid also for the documents which require applicants
View All FAQ
The second Call for Proposals of the Joint Operational Programme Black Sea Basin 2014-2020 is open starting with 1 October 2018 with deadline 5 February 2019
Herewith you can access the Applicants Pack for the 2nd Call for proposals of the Joint Operational Programme
View All Calls